As a graduate student working towards my PhD in Molecular Biology at a highly regarded U.S. university, the last thing I expected to hear touted for its beneficial effects on cancer was turmeric. Having grown up in India, I had witnessed the spice turmeric regarded, somewhat over-zealously, in my opinion at the time, as the ultimate panacea for all ailments. Fighting a sore throat? Turmeric boiled in milk was what the doctor ordered. Suffering a digestive upset? Turmeric-infused ‘khichdi’ – rice and lentil porridge – was a must. Healing from an open wound? A paste of turmeric and water would do the trick. And plagued by unwanted body hair?! Turmeric mixed with chickpea flour and water was better than anything Sally Hansen could concoct. You can therefore imagine my somewhat amused surprise when scientists and clinicians around the world were suddenly focused on curcumin, a bioactive component of turmeric, for its miraculous medicinal properties.

Turmeric is the underground stem (or rhizome) of the plant Curcuma longa of the ginger family. Fresh turmeric rhizomes look very much like ginger with a hint of orange on the skin. Upon slicing, it becomes apparent why turmeric is called the Golden Spice or Indian Saffron. A fiery, almost fluorescent orange, fresh turmeric has an earthy, peppery and vibrant aroma and flavor. Most turmeric, however, is consumed in powdered form, in which it also has a slightly bitter and mustard-like smell. You can find it in grocery stores in the ethnic aisles or Indian, Nepalese and Pakistani food stores (although see note on lead contamination below). Fresh turmeric can be spotted at some health food, Thai and Indonesian shops. 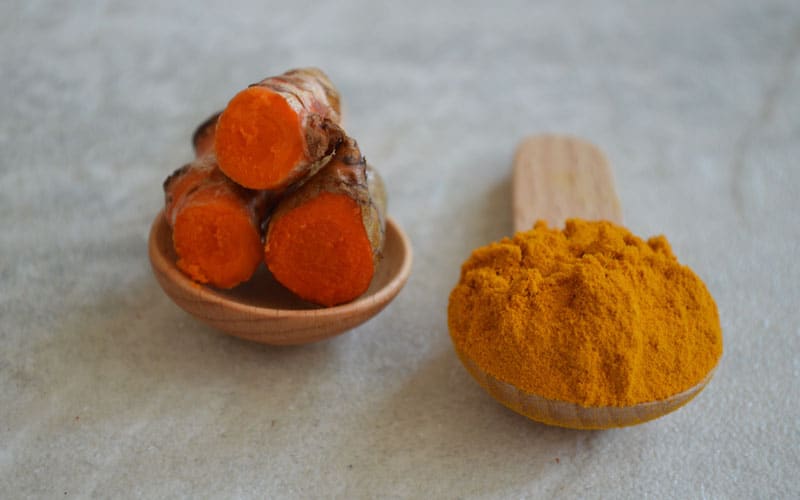 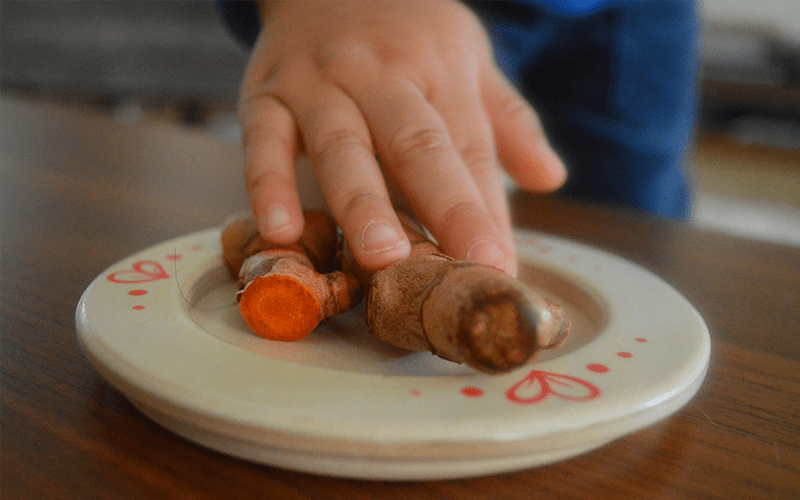 Ground turmeric can be stored away from light in an airtight container for about a year without a significant loss in freshness and aroma. Fresh turmeric root should be stored in the fridge for 1-2 weeks or frozen for longer periods.

As some of you may have experienced, turmeric causes stains! It was used as a dye before anything else and if you’ve worked with it, fresh or dried, you know why that was such a brilliant idea centuries ago. If you don’t want orange fingernails, use gloves, If you forget to do so, nail polish remover works well. On clothes, pre-treating with detergent or stain remover and washing once or twice with ample sunshine for drying can help. Bleach is a good option for countertop stains. 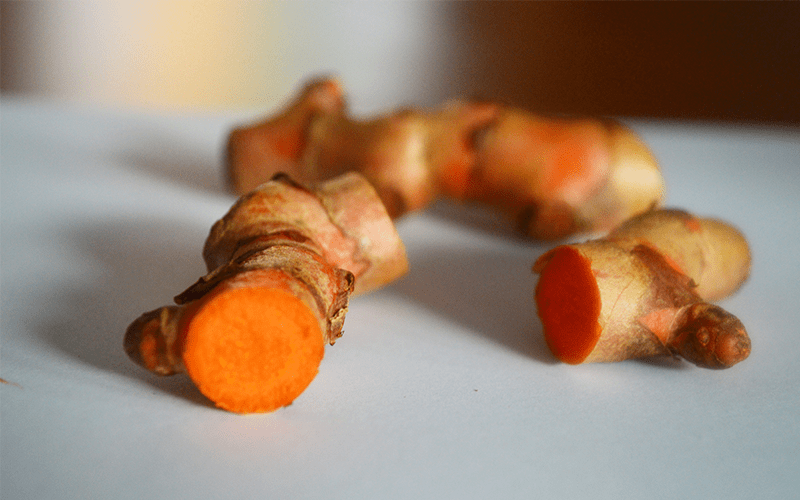 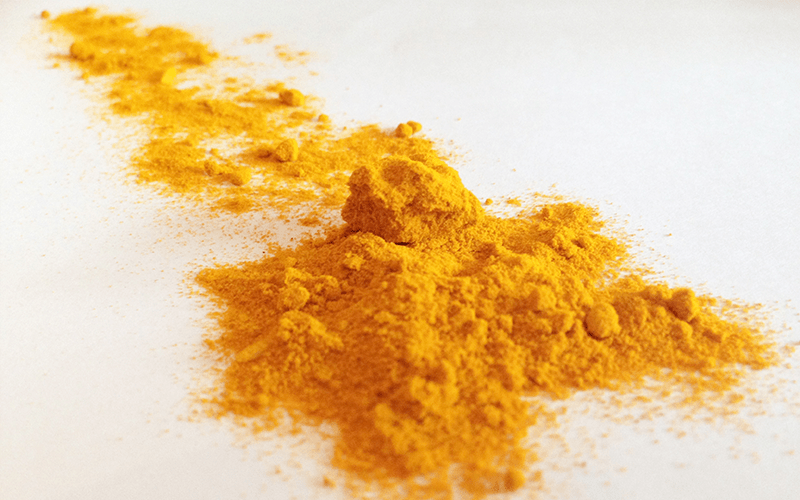 A note on lead contamination

There have been reports of some manufacturers using lead chromate to enhance the weight and color of turmeric powder. Lead-laced turmeric is more orange-red than yellow. This was very alarming as lead in high enough quantities can be a neurotoxin and cause developmental delays in children. The benefits of turmeric were convincing enough that I wanted to sort through this issue before deciding whether or not to give it to my son. I wrote to a few well known spice brands inquiring about lead testing, including McCormicks, and was assured that they do test for lead in their ground turmeric to ensure it is safe. We recommend buying McCormicks or a well recognized, preferably organic brand for turmeric and really all spices. I would steer clear of unlabeled or unknown brands from ethnic shops. Also worth noting is that we are exposed to lead in a multitude of ways and our bodies have ways of clearing it, especially if our diets are well balanced in iron, calcium and vitamin C. I breathed a sigh of relief on discovering these facts. Just make sure your turmeric is from a reliable source and you’re good to go.

Traditional medicinal use of Turmeric 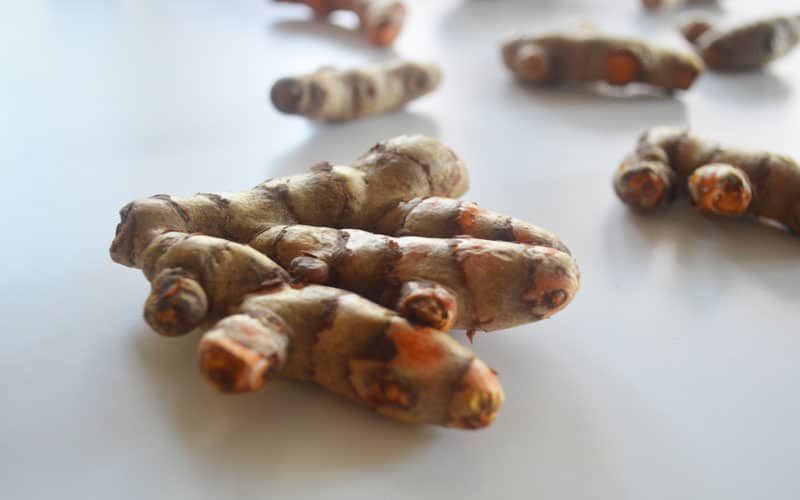 Science based health benefits of Turmeric

Curcumin, a compound found in turmeric, blocks a molecule called NF-kappaB, a central player in inflammation (1). NF-kappaB is the master conductor in the orchestra of inflammation – it acts as a trascription factor that binds to DNA and activates the expression of many genes that encourage inflammation, like cycloexygenase-2 (COX-2) and inducuble nitric oxide synthase (iNOS) (2). (COX-2 is a target of ibuprofen, a widely used over the counter anti-inflammatory medication). Via the inhibition of NF-kB and cellular signaling molecules like Protein Kinase C (3), curcumin blocks the production of other messenger molecules that promote infammation like interleukins and tumour necrosis factor – alpha. While some inflammation is a healthy and important part of our body’s ability to resist infections and heal itself, unchecked, chronic inflammation is like damaging wildfire and the basis of many chronic diseases including cancer, heart disease, diabetes, arthritis Alzheimer’s, Parkinson’s and even depression (4). Curcumin’s suppression of inflammation is very likely the basis of its beneficial effects in various disease discussed below.

The most vigorously studied benefit of turmeric and its active ingredient, curcumin, is for cancer. While most of the evidence is limited to animal studies, a few human clinical trials are ongoing. The ability of curcumin to thwart cancer in has been linked to its inhibition of NFkappaB, which promotes the expression of genes that encourage inflammation and cancer growth (discussed above) (5). Research has shown that curcumin can slow cancers of various organs including the lung, breast, skin and colon (6). Given its poor absorption (7) into the blood stream, it may be more promising for cancers of the esophagus and gut where it can exert its benefits without having to be absorbed. It’s also important to keep in mind the limitations of dietary curcumin as a therapeutic given the high doses required* (8). We advocate the use of dietary curcumin more as an anti-inflammatory molecule, useful in preventing rather than treating cancer, reason enough to embrace it in our kitchens.

Research from the University of California, Los Angeles has demonstrated that curcumin enhances the synthesis of a very important omega-3 fatty acid called docosahexaenoic acid (DHA) in the body (8). DHA is pivotal for brain health and low levels are associated with cognitive defects, anxiety and depression. DHA is either obtained through the diet, with fish oil being the best source, or can be synthesized, albeit inefficiently, from a precursor molecule called alpha-linolenic acid found in vegetarian sources like flax seeds and walnuts. In this study, researchers found that curcumin exposure increased DHA production in the brain and reduced anxiety levels in rodents. The authors conclude that vegetarian or diets low in fish may benefit from more turmeric to increase DHA production in the brain. It’s best to combine turmeric with black pepper to improve its bioavailability, as explained below* (9).

Turmeric is good for your gut

Research shows that curcumin in turmeric increases the levels of a protein in the gut (called Intestinal Alkaline Phosphatase or IAP) that forms tight junctions between the cells lining the digestive tract and heals a leaky gut** (10). Curcumin has also been shown to promote bile secretion by the gall bladder to aid digestion (11) and prevent gas and bloating in a small human trial (12).

Post traumatic stress disorder (PTSD), characterized by the activation of fear-based memories, affects about 8% of the US population, yet treatment options are limited. In one using a well established model for PTSD in rats, a diet enriched in curcumin, the bioactive component of turmeric, impaired the consolidation and activation of fear memories and affected the expression of genes involved in PTSD (13). The researchers suggest that curcumin may be useful in combination with other therapies for PTSD and anxiety disorders.

Several studies in animals have reported anti-depressant, anti-Alzheimer’s and anti-Parkinsons effects of curcumin, the active ingredient in turmeric (14). These benefits are most likely linked to the anti-inflammatory properties of curcumin as there is a between high levels of inflammation and various neurological diseases (15). More recently, small studies in humans have also shown promising results for curcumin for depression – in a study conducted by Australian scientists, 56 individuals with major depressive disorder were treated with a placebo or curcumin for 8 weeks. Between weeks 4 and 8, the curcumin-treated group saw a significant reduction in several mood-related symptoms (16). Larger trials are necessary but these studies suggest a potential role for curcumin either alone or in combination with existing medications for depression. Limitations include the poor bioavailability of curcumin which can be enhanced with new formulations or the addition of piperine from black pepper.*

*Limitations of curcumin as a therapeutic agent notes.... Click here to read.

*Limitations of curcumin as a therapeutic agent include: 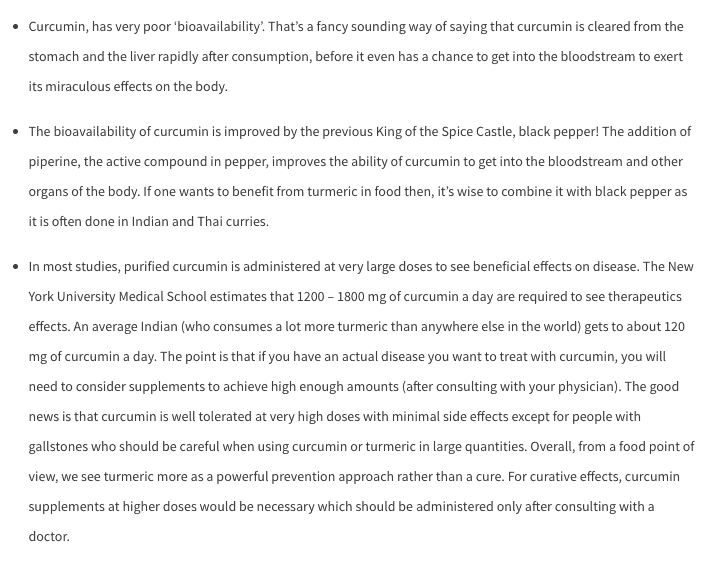 Close
**A healthy digestive tract has an intact lining... Click here to read.

**A healthy digestive tract has an intact lining ...

A healthy digestive tract has an intact lining of tightly-knit cells that prevent food and toxins from directly entering the blood stream. When this git lining becomes leaky (literally, rife with holes), which can happen for a plethora of reasons, mostly related to diet and lifestyle, the foods, chemicals and toxins we ingest can enter the bloodstream right away and are perceived as threats by our immune system. This, in turn, leads to increased inflammation which has been shown, over and over again, to be the basis of many chronic diseases, including eczema, psoriasis, asthma, Alzheimers, depression and even diabetes.
Close