When I think back to the flavours of my childhood in India, I think of cardamom. Cardamom in rice pudding, chicken curry, carrot halva and the pot of ‘chai’ tea my aunts would gather around on a cool, wet monsoon afternoon. I remember accidentally biting into a cardamom pod in a dish and the avalanche of flavours that would ensue – flowers, pepper, citrus – their intensity surprising at first, then familiar, comforting even. I also recall cardamom making an appearance when I was under the weather. Cardamom concoctions with honey, ginger and basil were touted as a cure for colds, coughs, stomachaches, nausea – the list was long! Typical of many spices, cardamom straddled our household’s kitchen and medicine cabinets.

There are two types of cardamom, green and black. Green cardamom is a good place to start as it has a more sophisticated and mellow flavour while black cardamom is a smidge harsh, minty and smoky (though quite lovely in particular preparations). Each cardamom pod contains about 10-15 tiny black, aromatic seeds where the magic lies.

Cardamom can be purchased whole or ground. While tempting to buy it pre-ground, it’s truly worth grinding the pods as needed. If grinding a small amount, smash the pods open, remove the seeds and grind them with a mortar and pestle, discarding the pods. If you need a large batch, it’s easier to grind the whole pods with the seeds in a spice or coffee grinder. 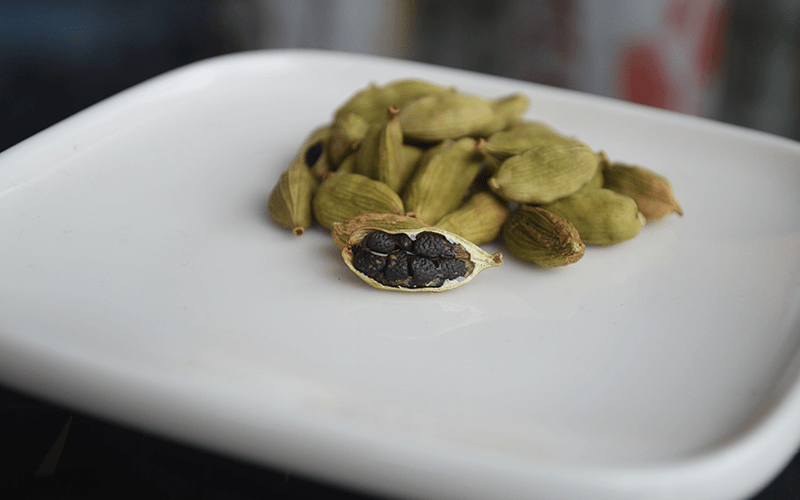 Cardamom’s allure is not limited to its flavour-enhancing abilities alone. For thousands of years, from the ancient Indian medical system, Ayurveda to Traditional Chinese Medicine to Egypt, cardamom has been revered for its medicinal properties. Some of it’s traditionally claimed benefits include: 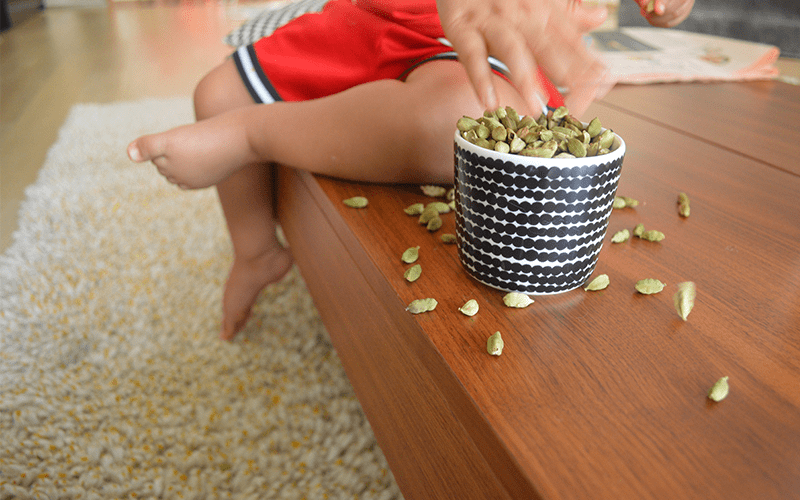 Science based health benefits of Cardamom

Researchers examined cardamom’s effects on a mouse model of skin cancer. Both tumour size and numbers were reduced when mice were given cardamom orally (albeit at a high dose) and specific detoxification enzymes in the body were activated. The researchers suggest that cardamom’s antioxidant effects may help prevent cancer (1).

Scientists also demonstrated the ability of eugenol, an active ingredient in cardamom and other spices, to reduce the mutagenic capacity of chewed tobacco, which often leads to mouth cancer. The limitation of this study was that it was conducted in a test tube rather than a human or animal. But the results are promising and warrant further investigation (2).

Researchers explored the benefits of various components of black cardamom for gastrointestinal disorders. They observed cardamom-induced reduced gastric lesions in response to alcohol. They also saw a direct protective effect by cardamom on the stomach mucosal lining, which serves as a barrier against acid production and damage in the gut (3).

Scientists studied the antibacterial effects of essential oils from cumin, cinnamon, cardamom and clove against a range of antibiotic resistant bacterial strains. Cinnamon was found to be the most potent antibacterial but cardamom also showed good antibacterial activity against Staphylococcus aureus – that’s the bug that causes MRSA in high school gyms, hospitals and really everywhere these days! This could explain why cardamom has traditionally been used for sore throats and lung infections (4).

Doctors and researchers conducted a randomised aromatherapy trial to look at the effect of a blend of essential oils from ginger, peppermint, spearmint and cardamom on post-operative nausea in 300 patients. Both nausea levels and the need for anti-nausea medications were reduced in the aromatherapy-treated group. Next up should be trials for this aromatherapy blend for morning sickness, a debilitating side effect affecting millions of women in pregnancy (5).

Researchers examined the effects of cardamom in a mouse model of myocardial infarction – essentially a heart attack – and found a cardioprotective effect. This benefit was shown to be accompanied by cardamom’s antioxidant and free radical sweeping up properties. Human trials remain to be conducted (6).